At the point of writing this piece, I have just returned from a brief visit to Tallinn. I joined a small delegation from the Rochester Diocese, attending the annual clergy conference of the Estonian Lutheran Church (EELK). Many of such visits have been made over the years, in both directions, as part of a thriving link between the EELK and the Diocese of Rochester. Archbishop Urmas of Tallinn visited the Diocese last year, for example, and shortly after that Bishop James of Rochester attended the celebrations in Estonia of 500 years of Reformation.

I joined the Rochester delegation also on behalf of St Augustine’s College, for whom the Rochester Diocese is a key partner (along with other Anglican dioceses in the South East). My task was to strengthen our link with the EELK’s Theological Institute, based in Tallinn (with a subsidiary centre in the old University town of Tartu). The Institute is where Lutheran ordinands do their final practical training, and where many of them pursue their entire programme of theological study. The Institute also offers courses in life-long learning, which in the EELK context serves a purpose not unlike that of our ‘Phase 2’ programme for curates – or indeed our new MA programme, popular among experienced Readers, deacons and priests. Thus the Institute resembles our college in more than one way. 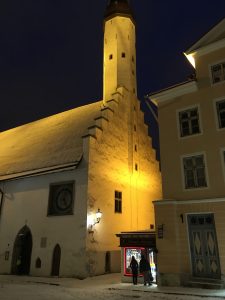 Püha, Püha, Püha! This phrase, I feel, sums up much of my visit. Since I was housed at the parish house of the Church of the Holy Spirit in Tallinn (see picture on the left), püha – ‘holy’ – was the first Estonian word I learned. (So guess what the second word was!) But, more importantly, the phrase captures the mixture of familiarity and strangeness that I experienced.

On the one hand, so much of the culture, language and worship seems similar. Old Tallinn is in many respects a medieval Hanseatic town like any of those scattered across the North and Baltic Seas, such as King’s Lynn, Hamburg and Stockholm. Up until the 18th century, the main language in Estonia was German – and old (Northern) German words are still to be found on the signs, tomb stones and menus of the old town. And the style of worship in the EELK will feel familiar to many Anglicans, Methodists or Roman Catholics. 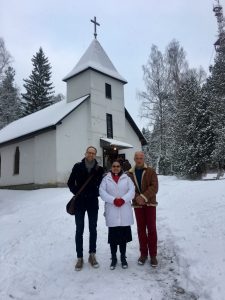 On the other hand, Estonia is utterly different. Take the language: apart from the odd word borrowed from German or Swedish, there is nothing familiar for the ear or eye to fasten on. Then there’s the fact that until fairly recently Estonia was part of the Soviet Union, with about a quarter of its current population being Russian. And due to Estonia’s complicated and painful political history – with successive Teutonic, Danish, Swedish, Russian, German and Soviet occupations – the Lutheran Church occupies a precarious position within Estonian society today. Historically connected with German and Scandinavian church culture, it faces a majority population that is not only staunchly patriotic (the theme of the clergy conference was ‘Christianity and Nationalism’) but also thoroughly secularised following decades of communism. And while sometimes favoured by the modern State as an ally in defending Estonian identity and culture (in the face of the ever-present Russian threat), the Church is much less embedded in local communities than, for example, Anglican parish churches often still are. It is under these circumstances that the Lutheran Church – a rich but small sub-culture in Estonian society – are cautiously exploring new opportunities for ministry and mission. 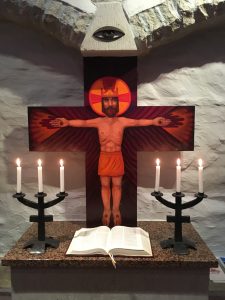 Back in Tallinn from the conference, I met with the Principal of the Theological Institute, and with some other teaching staff. The Institute is based at a beautifully renovated medieval hospital building, right next to the Holy Spirit parish house (the picture on the left shows the chapel). During the meeting we started planning the 2019 ecumenical weekend abroad for St Augustine’s ordinands, which (you may have guessed) is due to take place in Tallinn. But we also discussed other ways of strengthening the institutional link, including ideas for exchanges between students and staff. So, watch this space…

Guido de Graaff is Director of Studies and Tutor in Christian Doctrine and Ethics.