“God’s called me as I am”: Training for ministry as a neurodivergent ordinand 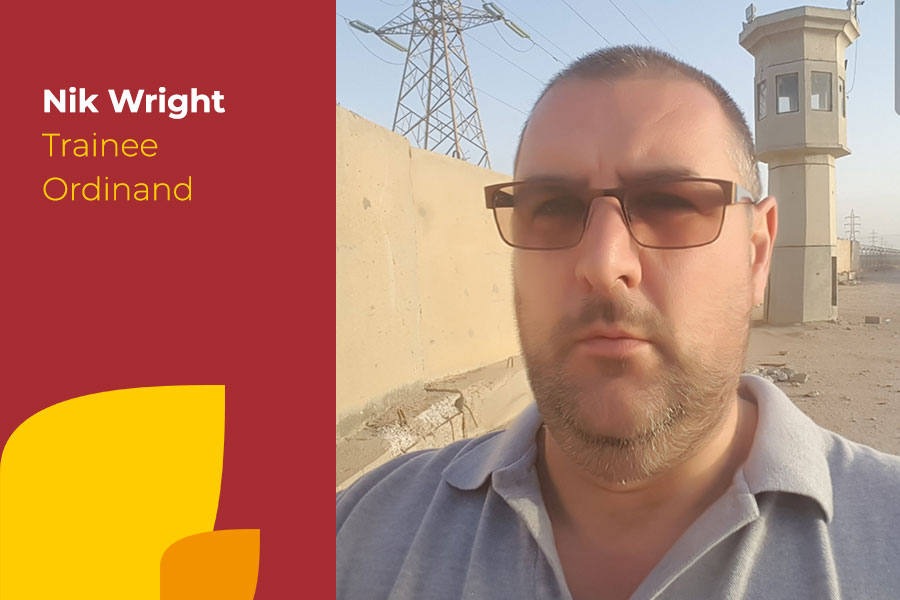 When Nik first received his call to ministry, he knew things would change. What he hadn’t expected was a God-sent moment at West Malling campus that would lead him to a life-changing revelation.

A wise man once said, “If you’re packing for a long journey, wisdom weighs nothing.”

Before I began my studies at St Augustine’s College of Theology, I assumed college would be about the provision of certain tools; memorising scripts, scenarios and models on how to minister.

That gave me cause for concern. Because of the way I’m wired, you could give me all the technical tools under the sun and I can tell you now, within six weeks I’d have forgotten all of it.

But if you give me something with which I can change my life – something I can grow into – it will stay with me forever.

That’s the power of wisdom and (thankfully for me!) St Augustine’s College of Theology was the right place to come to find it.

A call to ministry from the deserts of Iraq

My journey to being called to ministry and been quite a long and slightly unusual one.

I was working in counter-terrorism in the deserts of Iraq when I finally felt God speak to me and put me in the right direction. 48 hours later, I was back in the UK and telling my wife I was being called to become a priest.

Before I enrolled, I had no real idea of what college would be like. I was excited about going ‘back to school’ but I remember thinking, “Hang on, I haven’t been to school since I was 15! What on earth is this going to be like?”.

During my school days, I often had problems with learning and my teachers didn’t know how to help me. I still remember my careers master telling me that I would either be a career criminal or a dustman.

I was often told to sit at the back of the class, keep quiet and read a book. I love reading but it became a way of masking how much I was struggling; as long as I was holding a book, no one need know how slowly I was turning the pages.

Because of that experience, there was a part of me that was concerned that the people at college were going to judge me, or that I was going to fail.

As it turned out, I needn’t have worried 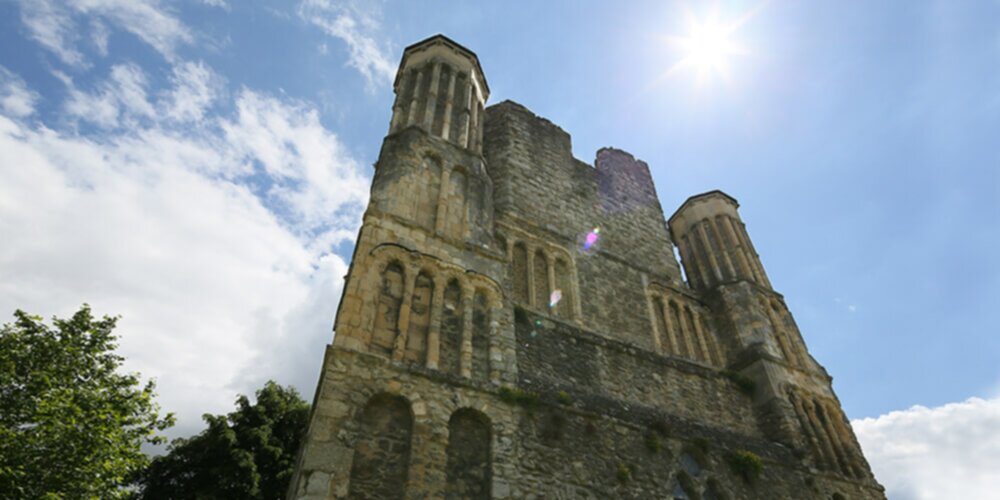 A life-changing meeting with a college tutor

Stumbling across St Augustine’s felt almost like a God sent moment for me.

I was googling theology colleges – or rather, my kids were doing the Googling for me! – and we found the St Augustine’s website.

I signed up for a taster session and attended with my wife. As soon as we walked through the gates at West Malling, we fell in love with the place. It just felt absolutely right.

It was during that visit that I first met Suzy Gregory, Tutor for Writing, Study Skills and Singing.

Considering everything that’s happened and all that’s changed for me since that day, meeting Suzy felt like another one of those God given coincidences.

“Having lived all my life without a diagnosis, it was a bit of a shock – but it answered a lot of questions.” 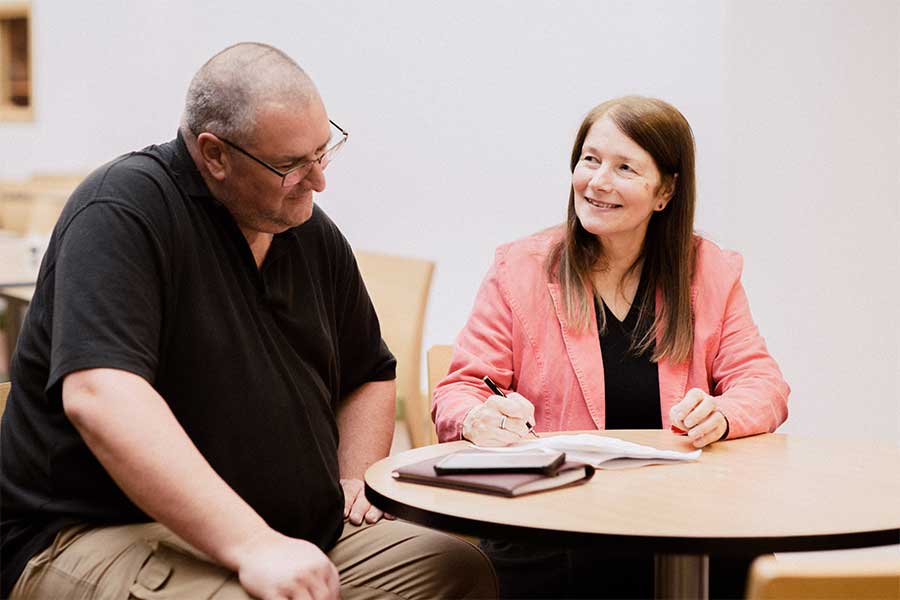 Suzy and I were chatting on campus when I mentioned my worries around studying, because I take a really long time to read things.

When Suzy asked whether I’d ever been diagnosed with a learning difference, I told her I hadn’t – but two of my children had been. She asked a few more questions and we talked for about half an hour while she explained that she suspected I may have some undiagnosed learning differences.

She wrote everything down for me, we said our goodbyes, and I left to find my wife. I remember getting back to the car later that day, handing my wife this piece of paper and saying, “Hey, they think I might have these.” She took one look at the list and said, “Yeah, I wouldn’t be at all surprised!”

As we discovered later down the line, Suzy was right.

“The insight I’ve gained has been revelatory”

Having lived all my life without a diagnosis, it was a bit of a shock but it answered many things.

I am reliably told I have dyslexia, dyspraxia, dyscalculia and attention deficit disorder (ADD). Some of these conditions explain why I struggle with reading, writing and holding on to one clear thought. Unsurprisingly, I find studying really difficult.

Conditions like this are sometimes described as learning differences or as neurodivergence; an umbrella term which describes diversity in the human brain and cognition.

I often refer to myself as neurodivergent to describe how I think, learn and process in a way that isn’t necessarily “typical”.

The insight I’ve gained about myself has been revelatory. If I hadn’t had met Suzy and pursued ordination training at St Augustine’s, I probably would have pulled out of the whole discernment process.

Getting to grips with a shock diagnosis

So much has changed since I received my call to ministry and there’s a lot to get my head round.

Neurodivergence is a completely new concept to me and I’m still just getting used to it. For years, I was always labelled as “thick”, so changing that label and challenging that misconception – which I’d internalised all my life – has been a big thing.

It’s hard, sometimes, to get to grips with a diagnosis like this. On the one hand, you’re furious! You start asking what it all means and you think, “Why did nobody spot this 40 years ago?”. You might even worry how people are going to react to you.

Thankfully, St Augustine’s is a safe place to share this kind of thing – and it’s a great place to receive support from people as well.

I’m grateful that the first people I opened up to about my newly diagnosed neurodivergence were my fellow students; everyone has been so accepting.

My tutors and fellow students are helping me to come to terms with a lot of the anger that I’d been carrying since school at how I was treated. They’re helping me to process a lot of baggage

By studying at St Augustine’s, I’ve also been able to get a better understanding of how I think and what my natural strengths are. I’ve learned that I’ve always been quite a problem-solver, for example, because of my fascination with the world and how people work.

It’s amazing to think that because of who I am – and how I’m wired – I’ve got this really useful skill that helps me work with and understand people.

“God’s called me exactly as I am”

What I’m really looking forward to about the next few years of ordination training is learning more about what makes me tick.

By the age of 50, you expect to know yourself inside and out – and while I do know myself pretty well, it turns out there’s always more to discover. God’s always revealing new things to us – what He’s going to show me next, I don’t know; but He’s certainly revealed that He’s got a sense of humour!

Ultimately, I think God’s called me to ministry knowing exactly who I am. I’m somebody who is wired differently to what would be seen as the norm, but God already knows that.

After all, He created me – which means He’s called me exactly as I am.

As part of our full degree programmes, St Augustine’s College of Theology offers all of our students support with study skills. To meet students like Nik and tutors like Suzy, sign up for a taster event and visit us at either of our campuses or online.

Our warmest thanks to Nik for sharing his story and being an invaluable member of our student community.